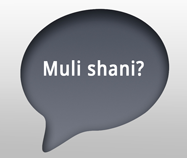 Spread the word, there’s a new source for learning Bemba online! The Bemba language, ChiBemba (also spelled Cibemba, Ichibemba, Icibemba and Chiwemba), is a major Bantu language spoken primarily in north-eastern Zambia by the Bemba people and as a lingua franca by about 18 related ethnic groups, including the Bisa people of Mpika and Lake Bangweulu, and to a lesser extent in Katanga in the Democratic Republic of the Congo, Tanzania, and Botswana. According to Lewis, M. Paul (ed.), 2009. Ethnologue: Languages of the World, including all its dialects, Bemba is the most spoken indigenous language in Zambia.

Thanks to  Richard Katebe and his work on Kitwe Online, a series of Bemba lessons is now available for you online. Bemba Lesson 1 describes Bemba as a very respectful language.

[quote]Plural forms of pronouns are used to convey respect for peers and for those older than yourself. When used in the singular form, pronouns would be directed at young children. The curious fact is that traditional rappers at the king’s court actually use pronouns in the singular to enhance the veneration of the king. But this is very advanced language! In general any man older than yourself is addressed as “father” – (ba) tata, an older woman is addressed as “mother” – (ba) mayo.[/quote]

Published in Art and Culture