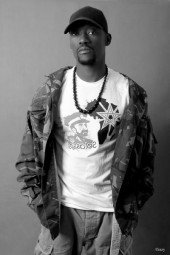 Cactus’s musical aspirations began in south London, England where he was schooled in writing and toasting by his close friend Mr.Lopez and a South London Hip Hop outfit called the Nappy Clinch Clan. Living in and around London’s African and Jamaican Community gave Cactus, as he says, a better understanding of he was and what he represented, hence the album title track “Bush Territory”. A year later he went on to study at Middlesex University and eventually returned to Zambia, Africa in 1999. In 2001, Cactus became part of a Zambian Based Hip-Hop label called cypher music for a year and this saw his debute appearance onto the Zambian Music Scene. Not long after, he sought out the producers for his album, “Bush Territory” and his search led him to top producer and proprietors of Kula Music. A relentless performer, Cactus has been busy working with artists on the intertional and local scene, artists such as Hugh Masekela, Mirriam Makeba, P-Square,Joe Angels, Mr Switcher and alot more. As time went on, he was given the alias “The phillosopher” by the Kula family because his songs always reveal spiritual insight, deeper life phillosophy and an understanding of the power of love. It is clear to see and hear that Cactus was born to do what he does and his lyrical content and style sets him apart from any other artists. Combining his rap like flows with the melodies and chants commonly associated with reggae and dance hall music.his debute looks to be a hot one.