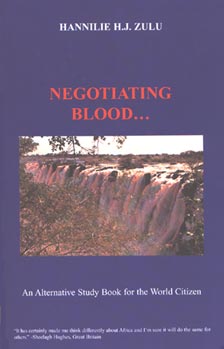 This month we feature a book by Hannilie H. Zulu entitled Negotiating Blood. The book is an authoritative African voice on African issues. For decades, we have heard people from the Western world speaking of Africa: What is the problem and what is the solution? What do the Africans want? How can Africa be developed?

While every European and American could call themselves experts, the Africans themselves have so far spoken very little. Africa doesn’t have a voice – or it is quenched by the western world aid industry, a giant living for all but common African people.

Negotiating Blood is not a women’s liberation book. It speaks about the big headlines of international politics. First of all: It is a death declaration to IMF, World Bank in Africa, and Western companies. Under their cover of aid contribution, they all continue to undermine the existence of a basically strong continent, forcing it deeper and deeper into misery.

It is also a war declaration to the African national leaders who recklessly continue to rob their populations – sticking to an unfortunate tradition of mismanagement.

With Negotiating Blood, Africa has got a voice. And a strong one. Read it! Act on it!

More from PopulaceMore posts in Populace »